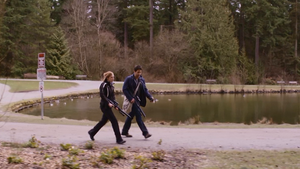 In December 2011 - January 2012, an Anomaly was recurring in Stanley Park, and each time it reopened it was in a different part of the Park. A Pteranodon and two Utahraptors came through the Anomaly and stalked the park. Tony Drake and Evan Cross also tried to track and study the Anomaly, but it always closed before they could reach it.

Evan Cross and Dylan Weir managed to send one Utahraptor back through the Anomaly before it closed again, while the other raptor was left marooned in the present and subsequently left the Park. The Pteranodon was captured by the Special Projects Group when it abducted Trevor Molison and kept him captive at its nest in Stanley Park, and the Utahraptor was killed when it fought with the Pteranodon and the two killed one another.

Retrieved from "https://primeval.fandom.com/wiki/Stanley_Park?oldid=99152"
Community content is available under CC-BY-SA unless otherwise noted.