« "My name's James Lester. Five years ago, I was put in charge of the ARC; a top secret government project investigating rips in time known as Anomalies. These Anomalies allowed long extinct creatures from distant eras to cross into our own time. Our leading research scientist was murdered... by his insane wife Helen, who planned to wipe out humanity. Danny Quinn, Connor Temple and Abby Maitland went through an Anomaly to stop her. No-one knows what happened to them; but as the human race survived, we must assume they succeeded. None of them ever returned; lost forever in a distant past, with no way home. All attempts at rescue failed. A new team was put in place, and many changes made to the ARC. The battle continues. There is always a new threat; whatever it is, we'll deal with it." »
— James Lester's recap of the events leading up to Series 4.[src]

Series 4 of Primeval is the fourth series of the original British Primeval television programme. Series 4 focuses primarily on the changes to the ARC in Connor and Abby's absence, Connor and Abby's changing relationship, and Matt Anderson's mysterious past and mission.

After a year marooned in the Cretaceous, Connor and Abby finally return to the present to find that the ARC has greatly changed in their absence, and is now funded by entrepreneur Philip Burton and led by the quiet and mysterious Matt Anderson. Connor and Abby are initially not allowed back on the main team due to a new military code, but soon manage to get back on, though they still have to try and earn their old positions on the team back.

When two Anomaly travellers (the Victorian lady Emily Merchant and the murderous Ethan Dobrowski) come to the present, Matt takes Emily in, and begins to open up to her on his past and who he really is, while hunting Ethan and trying to protect Emily from him. Meanwhile, Connor becomes more and more allied with Philip and the latter's mysterious New Dawn project for the Anomalies, and Connor and Abby's relationship begins to become strained because of this.

Eventually, Danny Quinn returns from the past as well, and Ethan is revealed to be Danny's long-lost brother Patrick. Both Danny and Ethan/Patrick return to the past, and Emily returns to her time as well; but not before Matt reveals to her that he is from the future and has been sent back to stop an apocalyptic disaster with the Anomalies in the present from destroying the planet. Meanwhile, Connor learns of a catastrophic upcoming event with the Anomalies, and ultimately allies with Philip and New Dawn against it.

Primeval Series 4 received generally mixed critical reception; some praised the action and new characters and the cliffhanger ending, but some others felt Series 4 to be bland and lacking in Primevals original spirit in comparison to the previous three series.

Due to the amount of time between Series 3 and Series 4, numerous rumours started concerning the plot.

Series 4 and Series 5 were filmed in Dublin, Ireland at the same time. 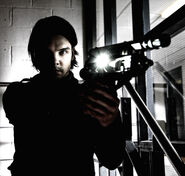 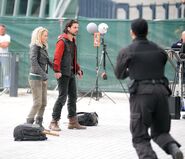 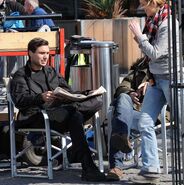 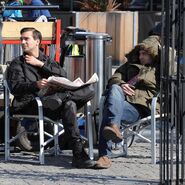 Behind the scenes:
The Making of Primeval • Through the Anomaly • Audio commentaries • Cutter's Odyssey • Genesis of a Creature • Primeval...Behind the Scenes • Totally Primeval • New Dawn - Making the New Primeval Part 1 and Part 2 • Meet the Cast • Inside the Tank • Behind the Scenes Featurettes

Community content is available under CC-BY-SA unless otherwise noted.
Advertisement