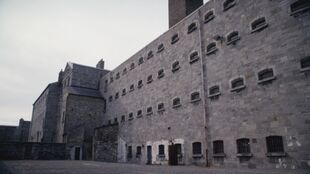 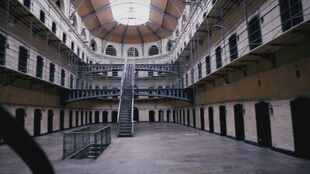 This Prison was a disused jailhouse that was used as a tourist attraction.

At some point, the prison had been shut down and no longer housed any prisoners - instead, it was used as a tourist attraction.

In 2011, two Anomalies, by an incredibly unlikely coincidence, opened up on exactly the same spot with one leading to the Pliocene and the other leading to 1867. This occurrence caused several satellite Anomalies to occur (all linking the satellites to the two main Anomalies). During one tour of the Prison, a tourist was locked inside one of the cells, and a satellite Anomaly opened in it, with a Terror Bird coming through and killing him and all disappearing before the tour guide could open the cell. The Anomaly Research Centre team found the fused anomalies, unaware of the exact situation, in another part of the prison and were confused because there was no sign of an attack in the cell and that they only detected one anomaly. More satellite anomalies opened and the Terror Bird ran riot across the site while Danny Quinn came through the Pliocene anomaly.

Ethan Dobrowski later arrived, trying to escape through one of the Anomalies but got lost in the prison. He shot at the team and escaped further into the prison before being forced into the courtyard. Once caught, Connor Temple and Abby Maitland watched as several more Satellite anomalies opened and eventually they solved the problem by separating the Anomalies using one of the Locking Mechanisms. Patrick escaped through the Pliocene Anomaly with Danny following, and Emily Merchant going through the Victorian Anomaly before it closed.

Retrieved from "https://primeval.fandom.com/wiki/Prison?oldid=99945"
Community content is available under CC-BY-SA unless otherwise noted.