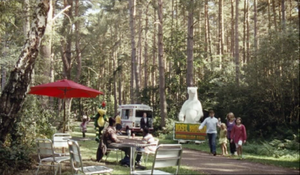 The Lost World Adventure Park was a prehistoric themed adventure park and was located in a conifer forest. It had concrete dinosaurs, ice-cream vans, cavemen actors and watersides.

Once an Anomaly to the Silurian opened up here. Nick Cutter, Stephen Hart and Taylor Craig came through to the park. Cutter, believing they were in the Paleolithic, saw a caveman actor and knocked him out with one punch. Abby Maitland and Connor Temple gratefully found the trio there, having previously though they were lost in the Silurian. James Lester then arrived and 'welcomed' Cutter and Stephen back to the present, he then had to sooth the caveman actor to prevent any lawsuits. (Episode 2.5)

Retrieved from "https://primeval.fandom.com/wiki/Lost_World_Adventure_Park?oldid=103638"
Community content is available under CC-BY-SA unless otherwise noted.