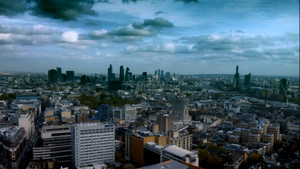 London is the capital city of England, located in the south east of the country. By 2011 nearly 8 million people lived there.

During the Medieval ages, London was already a city, containing one particular town near a forest. The town had a church and a tavern called The Green Man in it, and both William de Mornay and Elizabeth Lionel lived there.

In 1840, Lady Emily Merchant was born in London. (Episode 4.3) It is unknown if she was still living there in 1867, when she got married and became stranded on the other side of an Anomaly. (Episode 4.7)

In 1868, Matt Anderson travelled from the present day to London in that time period to find a Raptor responsible for gruesome deaths in 1868 London. Matt and Emily Merchant (who had previously returned to Victorian London in 1867) successfully captured the Raptor and escaped with it back through an Anomaly to the Present. (Episode 5.3)

London continued to grow through the centuries, and by the early 21st Century was a huge city. It also had its own large underground rail network, the London Underground, (Episode 1.2) and became the site of numerous Anomalies, which were tackled by the Home Office and then later the Anomaly Research Centre.

In an alternate timeline where New Dawn's effects on Earth reduced the surface of the planet to a sterile wasteland, London was left ruined and badly damaged. (Episode 5.1)

Places in and around London

Many of the locations in London were filmed in London like the British Museum and the River Thames.

Community content is available under CC-BY-SA unless otherwise noted.
Advertisement