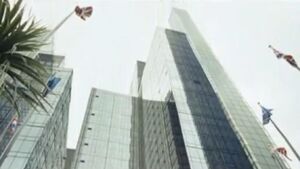 The Inner City Office Block was a building where a business called Lambert Smith Company worked. All 15 floors were temperature controlled.

The office block was evacuated when the Precambrian fog was mistaken for smoke from a fire, except for three executives, including company businessman Terry; who stayed behind to continue their discussion with Nagata over co-operation with Nagata Beer, due to its importance to the company's future. Firefighters Cooper and Armstrong also went into the office block, and Armstrong and Terry were both killed by the Precambrian Worms.

Nick Cutter, Stephen Hart and Jenny Lewis eventually went into the office block to investigate the Anomaly incursion, and Cutter was separated from Stephen by the Worms. After Cooper managed to escape the office block with Cutter and Stephen's help, Connor Temple and Abby Maitland arrived with leaf blowers to hold back the fog. The team used these to make their way to the remaining two executives talking with Mr. Nagata, and to rescue them.

Cutter then went to find Stephen, while Connor and Abby travelled through the ventilation to the fifteenth floor's server room (to turn the temperature up high enough to force the fog out through the ventilation). After Cutter and Jenny reunited with Stephen, Connor and Abby's plan worked, and Cutter then triggered the office block's fire sprinklers to kill the spawn released by the Precambrian Worms as a result of the heat.

The building was presumably cleared by the ARC and the Anomaly contained.

Retrieved from "https://primeval.fandom.com/wiki/Inner-London_office_block?oldid=106284"
Community content is available under CC-BY-SA unless otherwise noted.