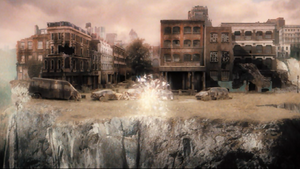 The Future City was a ruined, unknown city (possibly London) in the Future.

The Future City is a ruined, decaying city full of empty, derelict buildings. Lines of abandoned and rusted cars fill the streets. The city seems to be perched on a tall spire of rock. Other groups of buildings, on similar spires, can be seen on the horizon. A Future ARC building is located there.

An Anomaly opened at a Race Circuit in the Present, linking to the very edge of the Future City. Two Megopterans went through to the Present, where one was killed. Jack Maitland accidentally drove in a car through the Anomaly into the Future City, where he fell into and became trapped in an old bunker.

Danny Quinn, Abby Maitland, Connor Temple and Hilary Becker travelled into the Future City through the Anomaly to rescue Jack, and despite being attacked by Future Predators numerous times, they were able to locate Jack and free him from the bunker. The group then took refuge from the Predators in an old bus, until fire from an explosion forced a group of Megopterans out of the bunker where Jack had been trapped.

After Christine Johnson's death, Helen Cutter went through her Anomaly to the Future City and travelled to the Future Anomaly Research Centre to start a plan to travel through the Anomalies to the Pliocene and stop Humanity's evolution.

Danny, Connor and Abby returned through the Race Circuit Anomaly to the Future City to find and stop Helen. They were attacked in the city by three Megopterans, but they were able to trick them into going through Christine Johnson's Anomaly to her HQ in the Present.

The ARC team then travelled down into the Future ARC (followed by a Future Predator until they locked it out of the ARC's operations room), and were captured by Helen. After using the Anomaly Opening Device to open an Anomaly to the Cretaceous and going through, Helen closed the Anomaly behind her and left the ARC team in the Future to die.

As the Future Predators broke into the ARC control room, Connor managed to reopen the Cretaceous Anomaly with another Anomaly Opening Device. The team then fled through into the Cretaceous and closed the Anomaly behind them to stop the Predators from following them through.

Creature Prison: Cell block that Cutter and Jenny were held in (Episode 2.7).

Future city: the building that Jack Maitland was trapped in (Episode 3.8).
Add a photo to this gallery
Retrieved from "https://primeval.fandom.com/wiki/Future_city?oldid=100020"
Community content is available under CC-BY-SA unless otherwise noted.