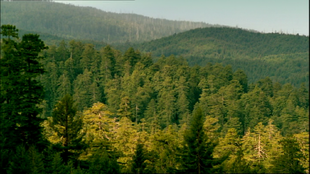 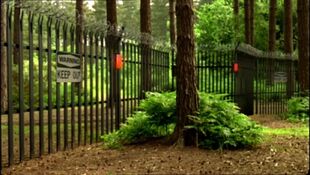 The Forest of Dean is a large cultural region which is also covered by 110,000 acres of mixed woodland. The Forest lies between the rivers Wye and Severn in the western part of Gloucestershire and on the borders of Wales and Herefordshire.

At some point in the 1990s or early 2000s, a Smilodon cub presumably came through an Anomaly from the Pleistocene, and was found by Valerie Irwin in her garage in the Forest of Dean and secretly raised there by her. (Episode 2.3)

Eight years after Helen went into the Permian, a Scutosaurus and a Coelurosauravus named Rex came into the Forest of Dean through the Anomaly, and Rex was found by Ben Trent. Ben and Abby Maitland went into the Forest of Dean with Rex, and Nick Cutter, Stephen Hart, Connor Temple and Claudia Brown also searched the Forest for evidence of the Gorgonopsid. When Ben fled back home, Abby, Cutter, Connor, Stephen and Claudia found the Scutosaurus, which led them to the Anomaly.

The Anomaly site was subsequently secured by the Home Office, and Cutter and Captain Ryan went through with Rex on an exploratory mission. Rex, Cutter and Ryan returned to the Forest of Dean in the present through the Anomaly just before it closed, and the Gorgonopsid then attacked until Stephen rammed it with the CMU's Toyota Hilux and later killed the creature by gunning it down.

Following the Anomaly incursion in the Forest of Dean, Claudia Brown had Captain Ryan completely clear the area and left him incharge of securing up the Anomaly site. (Episode 1.2) A perimetre fence was also added around the Anomaly site to stop unauthorised access or creatures escaping. (Episode 1.6)

Months later, the Forest of Dean Anomaly reopened, and Helen Cutter escaped through to the present followed by a family of Future Predators. The Home Office team subsequently searched the area for any signs of creatures, but found no tracks and so assumed that the creatures had gone back through the Anomaly. In actual fact, the Predators had set up a 'nest' in a disused animal crate storage shed. Over the nest few days, the Predators killed four people and one lion, from places in and around the Forest and took their bodies back to the shed. The Home Office team eventually located the Predators, killed the male and captured the five young.

Some days later, Nick and Helen led a mission through the Forest of Dean Anomaly, into the Permian, to find the future Anomaly there, using the young Predators to locate it and then contain it, while the rest of the Home Office team waited at the Anomaly site in the Forest for Nick and Helen to return. The mother of the Predator family also slipped past the team and through the Anomaly to get its young back.

Nick and Helen both eventually returned through the Anomaly to the Forest of Dean in the present, but Helen went back through into the Permian when Stephen refused to join her.

When the now-fully grown Smilodon which Valerie Irwin had raised, began stalking the nearby Blue Sky Park, and ate a guest and the park manager, the Anomaly Research Centre team investigated, and tried to capture the creature when they discovered from photos what it was. Cutter eventually discovered that Valerie was the one harbouring the Smilodon, and Valerie set the creature on him at her house. The Smilodon killed Valerie while attacking Cutter, and the creature was then captured by the ARC.

Retrieved from "https://primeval.fandom.com/wiki/Forest_of_Dean?oldid=107679"
Community content is available under CC-BY-SA unless otherwise noted.