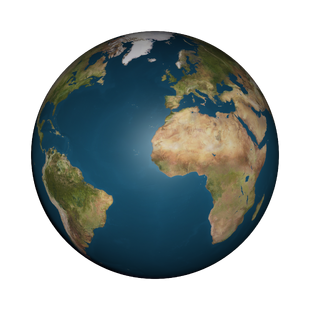 The planet Earth is the setting of Primeval, and home to Humanity and every single creature seen in the show. It has various diverse locations, ranging from sweltering deserts to polar icecaps, thick jungle to open grassland, and a complex water cycle. Earth has one natural satellite. Its history has been affected by the anomalies, which have appeared throughout time.

For full history and timeline of Earth, see Timeline

The moon is Earth's only natural satellite and which formed 4.6 billion years ago around some 30–50 million years after the formation of the solar system. Humans first landed there in 1969.

Philip Burton referenced this when explaining how they were on the brink of great discoveries regarding the Anomaly phenomenon, saying that 'not since man first walked on the Moon has humanity been so delicately poised on the threshold of a New Dawn.' (Episode 4.2)

Retrieved from "https://primeval.fandom.com/wiki/Earth?oldid=105902"
Community content is available under CC-BY-SA unless otherwise noted.