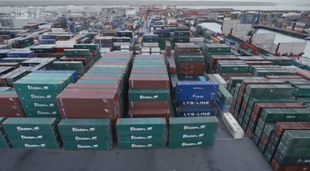 The Docks is an area where a Kaprosuchus is found in a construction site, where it had been feeding off homeless people and builders - until the builders decide to burn what they think is just a makeshift homeless house but is in fact the Kaprosuchus' den. This angers the Kaprosuchus who chases the builders and Abby Maitland, Connor Temple and Duncan (who are there investigating the deaths). Abby, Connor and Duncan are rescued by Matt Anderson who was following Abby. The Kaprosuchus attacks Matt’s car but Matt and the others manage to drive away and escape.

Abby's partner's gun malfunctions, and as he stoops to fix it the Kaprosuchus drops down in front of him. When he shoots his EMD the shot ricochets off the walls and hits him, stunning him. He helplessly watches as the Kaprosuchus opens its jaws and devours him. Soon after the Kaprosuchus almost kills Duncan who only narrowly escapes through a small gap between containers. He then runs into Connor who hides him in a container for his safety. The creature comes at Becker from above but luckily Matt, Connor and Abby shoot it with their EMDs and kill it.

Retrieved from "https://primeval.fandom.com/wiki/Docks?oldid=94809"
Community content is available under CC-BY-SA unless otherwise noted.