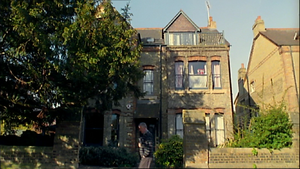 The Dexter house was the home of Jane Dexter and her two young children in England, and was on an Anomaly fault line.

An Anomaly opened one day in the Dexter residence's cellar, and floodwaters poured through from the other side and rapidly flooded the cellar. When Jane called a plumber in to investigate the flood in the basement, a Hesperornis which had come through the Anomaly attacked him, and the Home Office were subsequently alerted to the Anomaly incursion.

After two hours on the other side of the Anomaly, Cutter was reeled back through into the house, and a team of Special Forces divers were sent by Claudia Brown through the Anomaly and brought Helen back by force.

Retrieved from "https://primeval.fandom.com/wiki/Dexter_house?oldid=99177"
Community content is available under CC-BY-SA unless otherwise noted.