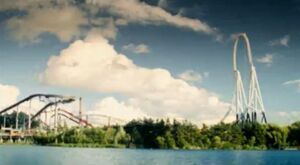 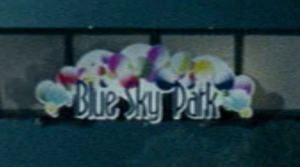 A sign at the Forest of Dean Train station.

Blue Sky Park was an amusement park in the Forest of Dean, filled with rollercoasters, picnic areas, playgrounds and paintball courses, and surrounded by a sustainable woodland. The park was run by Peter Campbell, who also played a lion mascot for the park.

Park ranger Valerie Irwin found a Smilodon cub in her lodge, and, presuming it was some kind of genetic experiment, reared it up to a large, healthy cat.

The Smilodon began killing park visitors when Valerie's food could no longer sustain it; eventually attracting the Anomaly Research Centre's attention and bringing the field team investigating. Peter dressed in a Lion costume, to lighten the mood of the park guests. Unfortunately Connor Temple mistook him as a creature and shot at him. Luckily, the bullet only penetrated the plastic head of the costume, but it was a near miss. Terribly upset, Peter stormed away, and had to go to a meeting at his head office to discuss "why somebody was shooting at his guests".

Later on, the Smilodon killed Peter Campbell and later Valerie herself, before it was tranquilised and taken away by the ARC team.

Retrieved from "https://primeval.fandom.com/wiki/Blue_Sky_Park?oldid=106343"
Community content is available under CC-BY-SA unless otherwise noted.